We rode the train through the Scottish Highlands to Mallaig, a storybook harbor town surrounded by a jumble of whitewashed buildings.

We missed the last ferry to the Isle of Skye. The man at the dock said, “Sorry. We’re not on the holiday schedule now.”

Stranded until morning, we booked a room at an inn close to the harbor. The pub wouldn’t open for hours.

“Off for a ramble!” Sara tallyhoed in her fake Scottish accent, waving her souvenir walking stick toward the green hills that rose up behind the town.

We trekked across the open countryside, the terrain alternating between steep climbs and flat expanses with rocky trails. The last thing we imagined we would discover was a red public telephone booth. But we did. Nearby, there was a cottage painted sky blue; the front door, orange; the window trim, bright yellow. 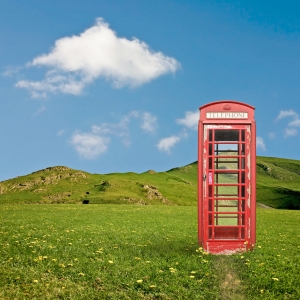 From behind the cottage, a lanky old man appeared. One very large sheep lumbered along beside him.

For a time, we stood together and looked out toward the sea. The only sound was the wind.

“He’s called Sydney.” The man nudged the sheep with his knee.

Agreeable, Sydney inched closer. We hesitantly patted him, then grew braver and burrowed our hands into his woolly coat.

“Care to come in for a cuppa tea then?”

Feeling lucky, we followed him and his pet sheep into the little blue house.